In a viral video that now has over 20 million views as of this writing, a school teacher in Mexico captured a sweet moment described on social media as “pure empathy,” when a young student with Down syndrome comforted his distressed classmate who happens to have autism.

In the video below, you can see one of the two boys appears visibly distressed while the other attempts to comfort his friend by hugging him, patting him on the back, and moving his arms around in a therapeutic pattern both of the boys are likely familiar with.

The video was posted on the Facebook page Jalisco oculto, a page dedicated to sharing location stories and information from in and around Jalisco, Mexico that describes itself as being for people tired of bad governments.

As interest in the video took off, it was shared to additional social media platforms, including Twitter.

A boy with Down syndrome with a huge heart, comforting in his own way his colleague, an autistic child.

This is EMPATHY in its purest form 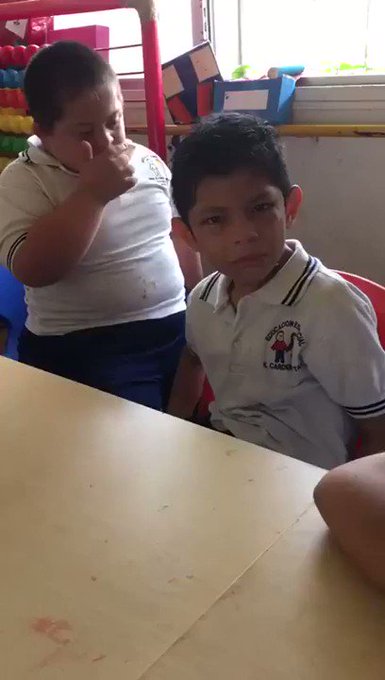 46.3K people are talking about this

“This child remind us that Love is instinct and Love is innate and that Hate is taught. The lack of love and empathy is the root to our problems. We need Love & Empathy in this world.”

Social media users were quick to share their own stories of friends and relatives that have been diagnosed with Downs syndrome or are on the autism spectrum.

My son has autism and has been in a classroom like this for all his life.

I always feel when I go to class with him that it is a room of angels. They are so kind-hearted and tender.

It’s the same in the school bus. The other students can’t wait to wave hello to me.

I’m raising a child with Autism. She has the purest heart and loves to pray for people. If she sees you are sad, even strangers, she immediately wants to hold you and pray. She’s eleven now and I pray she keeps that spirit of empathy and prayer. Love this story.

17 people are talking about this

I have a Down Syndrome brother who is now 61 years old. He has brought great joy to me, my family and anyone he comes into contact with! He has so much empathy and love for everyone-he’s a mush really!

One Facebook user said “this boy is a clear example of loyalty, tenderness and empathy for others, all my admiration and respect!!” Others commented on how the video touched their hearts and gave them hope.

While there are no reliable estimates of the number of people diagnosed with Down syndrome in Mexico, it is estimated that there are about 6,000 babies born with the genetic disorder in the United States.

According to studies, the prevalence of Down syndrome at birth increased by 31.1% from 1979 through 2003.

Around 1 in 59 children in the United States are diagnosed with Autism Spectrum Disorders, according to the Centers for Disease Control and Prevention.