Margaret Hubl was 89 when she breathed her last, but her family and loved ones will always remember her for her special gift that she used to let them know how much she loved them. Margaret was an amazing quilter, and she didn’t just do it for the love of the hobby. She made quilts for every single one of her family members so they’d have a piece of home with them wherever they went.

The matriarch’s legacy was so profound that her family decided to celebrate her life and her lovely handiwork in a unique way at her funeral, Today reported. When her loved ones walked into the church in July 2018, they were greeted by the sight of every single quilt she had ever made. Her family had draped her quilts over the backs of the pews to honor her memory.

Margaret’s granddaughter, Christina Tollman, revealed that she discovered just how prolific her grandmother had been as a quilter once all the quilts were in place at the funeral. “Never did I imagine how many there were,” she said. “We covered almost every single pew in that church. I never knew how many she actually made.” The quilts aren’t the only special legacy that Margaret left behind, though.

Thanks to Christina Tollman for sharing this beautiful picture of her grandma’s funeral. She was an avid quilter. 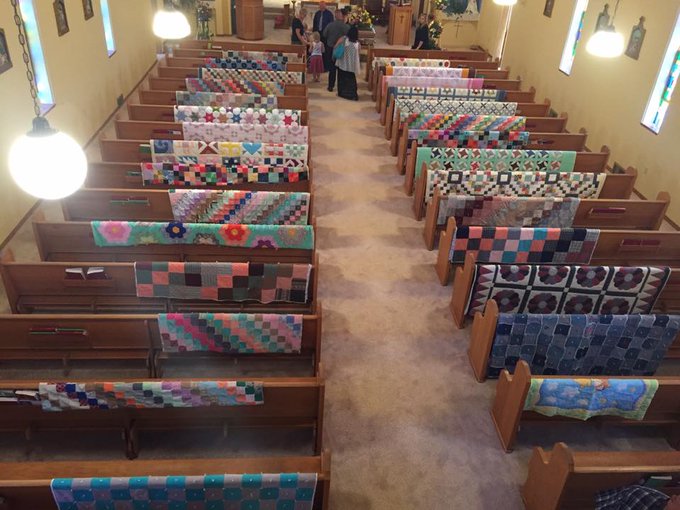 Margaret dedicated her entire life to taking care of her family.  She and her husband, Henry, had three children together, but the family grew much larger after a tragic accident robbed her sister-in-law’s children of their mother. She took the orphaned twins as her own, and raised all five of her children in a small three-bedroom home on a farm.

That was when Margaret took up sewing to ensure her children could all stay clothed. Eventually, they grew up and moved out to start families of their own. When she began to have grandchildren, the loving grandma decided to start sewing something special for them, too. She made quilts for each of her grandkids as presents for when they graduated from high school.

Christina revealed, “She wanted us to have something to wrap up and keep warm in when we went away to school.”

Margaret’s family discovered just how much thought she had put into each quilt after she passed away. “When we sat down to go through her things we found this — I call it a pocket notebook. Inside it says whose quilt she was working on, what day she put it in the quilt frame and which day she took it out,” Christina added.

When prolific US quilter Margaret Hubl passed away in July, 2018 in Nebraska at the age of 89. to honour her memory all of the quilts she had ever made were displayed at her funeral #womensart 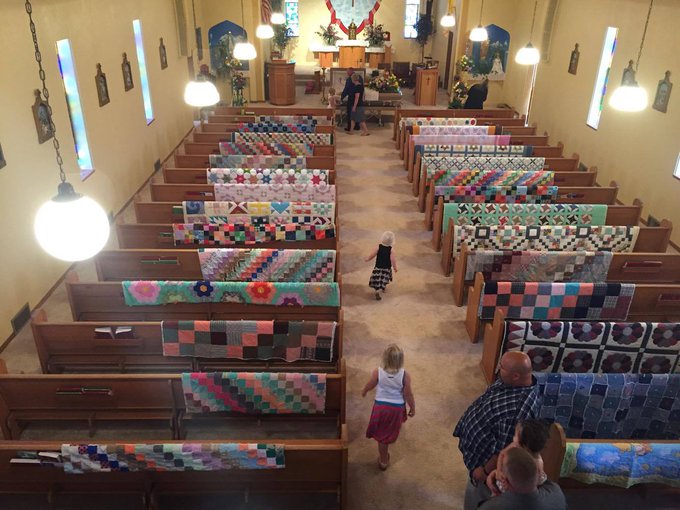 373 people are talking about this

As Margaret’s children grew up and struck out on their own, she no longer had to spend as much time looking after them. This freed her up to invest more of her time in quilting. Soon, the quilts were no longer just graduation presents; she also began to make them as wedding gifts for her grandchildren. “I actually have three cousins that are not married, and the day of her funeral was the day that they got to see their quilts for the first time,” Christina said. “That was really kind of a neat moment.”

Margaret’s handiwork ensured that her family had something to remember her by; every time they snuggled into a quilt during the winter, they’d remember the love their grandmother sewed into the quilt. “This is the love that Grandma made for each of us. This is what she made for each of us to wrap up in when we hurt,” Christina said. “When we miss her.”