“God does have a way of lining things up,” Kanye West once said in an interview with Forbes.

After building his own admirable legacy in the music business, Kanye West is turning away from what he’s best known for and is steering towards gospel music alone.

On Twitter, Andrew Barber, owner of Fake Shore Drive, a Chicago music blog, wrote, “Kanye also announced that he is no longer making secular music. Only Gospel from here on out.” The famed rapper has been playing new music from his next album, Jesus is King, in Chicago, New York City and Detroit, as reported by CBS News.

His wife, Kim Kardashian West, also put up a list of the tracks from the album that mostly go along religious themes. 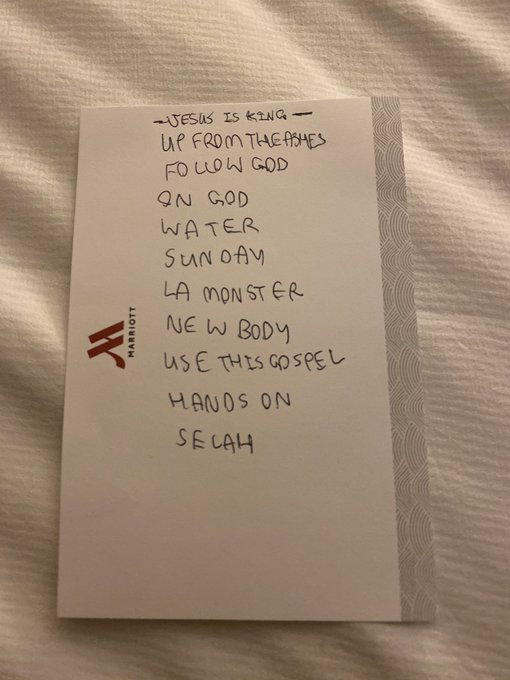 18.6K people are talking about this

However, it was only a few years ago that he declared himself a God after the release of his album, Yeezus in 2013. When he was asked about the anthem he made, titled ‘I am a God’, he told W Magazine, “I made that song because I am a god. I don’t think there’s much more explanation. I’m not going to sit here and defend shit. That shit is rock ’n’ roll, man. That sh*t is rap music. I am a god.”

What inspired him to write the song was an incident that happened a few years ago before the Paris Fashion Week. West was invited to a runway show only if he agreed not to make an appearance at any of the other shows. And the next day, he wrote the song. “Nobody can tell me where I can and can’t go. Man, I’m the No. 1 living and breathing rock star,” West said.

But since then, he’s said to have had a major turnaround and one of the reasons behind it is his religious beliefs, which includes “being in service to Christ” and “the radical obedience”.

People had mixed reactions as his image and his music flipped.

Kanye West got the hip hop world buzzing about an album titled Jesus Is King! This dude here is changing the game. It’s amazing.

675 people are talking about this

Jesus is King is trending on Twitter except no one is talking about Jesus of Nazareth, the savior of the world & son of the living God who created heaven and earth.

They’re talking about the self-proclaimed god Kanye West who is a mere man.

Kanye’s rebrand has been disgusting. He picked a crowd most likely to forgive and blindly follow.
It’s predatory at best.

While talking about her husband’s conversion to Christianity, Kardashian told The View (as quoted by CBS), “Kanye started this to really heal himself and it was a really personal thing, and it was just friends and family. He has had an amazing evolution of being born again and being saved by Christ.”

West has also talked about wanting to start a church of his own and the musician, now in his 40s, has been conducting his own Sunday service. “[the church], it’s honestly more like a healing experience for my husband,” his wife told Elle. “It’s just music; there’s no sermon. It’s definitely something he believes in—Jesus—and there’s a Christian vibe. But there’s no preaching. It’s just a very spiritual Christian experience.”

A source also told People, “He is extremely passionate about his faith and wants to share it more regularly with people. He spends a lot of time studying and praying, and wants to share his journey… He understands brokenness and the need for healing, probably more than most people. He believes in the healing powers of music, but also believes that God can step in and heal people’s brokenness and their issues.”

When the couple was waiting for their fourth child, who they were having via surrogacy, they would have a special prayer to acknowledge their “gifts”.

“It’s very sweet. They pray for all their children, but they really do spend time talking to God about the pregnancy, the surrogate, the rest of the family,” a source said. “It’s their way of acknowledging that this baby is a gift from God, and that they’re very fortunate to have four gifts now.”

Talking about her family’s spiritual side, Kardashian told Vogue, “We don’t share it much, but we’re really religious. We start our day with a group chat with a Bible verse from my mom, and everyone chimes in on the meaning of it.”