For the past several years of cultural growth in the realm of the spiritual, an increased focus on numbers such as 11:11 has surfaced, possibly even so characteristic to this decade that the phenomenon is later remembered as a thing of the 2010’s decade.

Therefore naturally, the spiritual community recently offered insight into the meaning of November 11, 2019, the day of “11/11” in which a very rare “Mercury Eclipse” event occurs, the perfect conjunction/occultation of Mercury and the Sun in Scorpio.

For probably around a decade or longer, a belief has existed in the spiritual community that the numbers “11” or “1111” hold within them a sort of energetic property, associated with opening doors, manifesting things, or new beginnings.

Some even suggest that synchronicity falling upon the number 1111 can indicate that our ancestors are working in alignment with us, giving us a kind of message or doing something to help us maintain peace and prosperity.

In addition to the day of 11/11 and the Mercury occultation, a Full Moon is just around the corner.

Are you still searching for your life purpose? You won’t believe what the science of Numerology can reveal about you!

That’s right, the numerology of your birth date, regardless of what month you were born, can reveal surprising information about your personality.

Unlock the messages hidden in your Personality Code now with your free personalized video report!

Click HERE to learn what Numerology says about your life using only your Name and Birth Date.

The Full Moon has a few different tones and qualities to it, but more than anything it emphasizes the primary lessons and focuses of this year 2019, while also emphasizing the calming and soothing (Neptune/Pisces) of emotional intensity (Pluto/Scorpio).

Thankfully, the insight provided by both the 11/11 event and the Full Moon seem to emphasize resolution to this year’s purgative, transformative, emotionally raw and open Scorpio/Pluto energies.

All of these energies revolve around this year’s main event, Saturn conjunct Pluto and the two eclipses exactly aligned with the once every 36 year aspect (July 16, 2019 and January 10, 2020).

This is the chart for the Full Moon, peaking at the very earliest hours of the morning on November 12, which one might consider the very end of the 11:11 “day.” 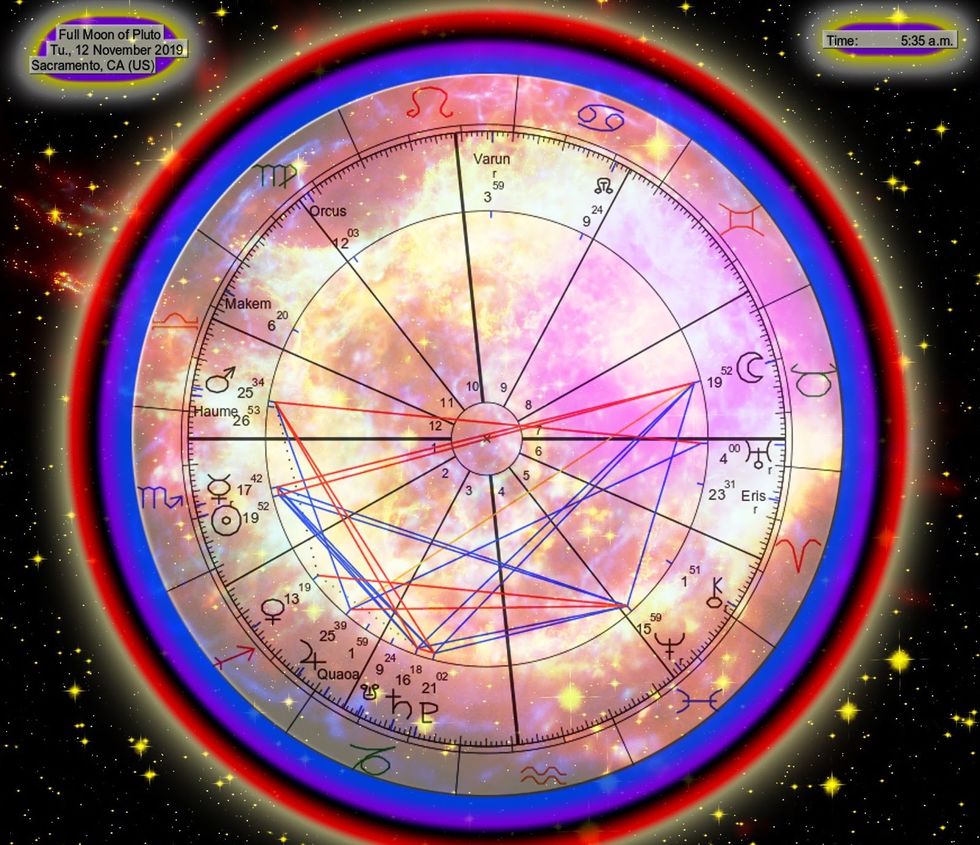 The first primary aspect being made by the Sun/Moon during this event, is a positive configuration of sextiles/trines to Pluto.

With the Sun in Scorpio and positive aspects being made to Scorpio’s planet Pluto, once again a tremendous amount of focus is being placed on these energies of emotional rawness, facing what has been built up, and things of that nature.

If you look close, you’ll notice the Moon at its peak is making a golden line to Jupiter, the positive planet in its own sign of Sagittarius.

That golden line represents a quintile aspect, the angle made between points on a 5 pointed star or pentagram.

The quintile / biquintile aspect seems to be like a hidden gem in astrology, an ultra-functional angle and the only one tied in itself to synchronicity, fate, or things falling harmoniously into place.

It’s an amazing omen that during the Full Moon, two aspects of major resolution to the purges, changes, and uncomfortable facing of what has been built up are peaking with it.

Are you still searching for your life purpose? You won’t believe what the science of Numerology can reveal about you!

That’s right, the numerology of your birth date, regardless of what month you were born, can reveal surprising information about your personality.

Unlock the messages hidden in your Personality Code now with your free personalized video report!

Click HERE to learn what Numerology says about your life using only your Name and Birth Date.

An aspect of fate and synchronicity (quintile) between Jupiter and the Moon suggests that some miraculous, perfect puzzle piece of good luck could come to people in the last couple weeks of this month, and the astrology seems to point to a time where this could precisely unfold.

In the last week of November, a perfect Venus conjunct Jupiter in the sky, in the depths of Jupiter’s sign Sagittarius and right on the Galactic Center, will create an atmosphere perfectly ripe for social/romantic (Venus) expansion, luck, growth and positivity (Jupiter/Sagittarius).

If a Full Moon has an effect that reverberates for the next couple weeks after the peak, and then a week and a half later it’s the grand finale of Jupiter in its own sign, insulating us from the coldest and most purgative effects of Saturn conjunct Pluto, well it seems clear what this is pointing at.

One of the most distinctly positive moments in perhaps this entire year could individually happen for anybody around the last week of November when Venus conjunct Jupiter on the Galactic Center occurs, and this Full Moon seems to point directly to this moment.

Venus square Neptune is also starting at the same time, something that could influence a hazy, sleepy, imaginative aspect to the social/romantic climate of the day.

The more potentially volatile or emotionally raw features of all the Scorpio/Pluto focus could also be neutralized by the calm waters of music loving, colorful Venus square Neptune.

This continues a very firmly emphasized theme of Scorpio/Pluto intensity being calmed by the spiritual, pondering Neptune/Pisces energy.

For example, the highly anticipated or even feared Mars square Pluto that occurred in the past couple weeks, well the volatile potential of it seems to have been drastically calmed by Mars quintile Neptune.

So remember, if you have any romantic/social connections (Venus) to pursue, you might want to try the last week of November.