Loss is just so painful that it cannot be explained. Just hearing about tragedies of someone’s life can bring tears to one’s eyes. That is what happened to the viewers of a recent episode of Gogglebox, a British series where celeb viewers commented on tales from different families across the United Kingdom. An emotional story of a father and his newborn child broke the hearts of many.

According to Mirror, the celebrity viewers of the Stand Up To Cancer special episode of the series were brought to tears after listening to a particular story. The story was about the couple, Brett and Nicola. Brett was first diagnosed with a brain tumor in 2015 and the doctors suggested surgery.

“We sat down with his neurologist and they went through the extremes of what the surgery could lead to,” said Nicola as she recalled the incident on the show. On hearing the doctors, the woman was stunned. They told her that the surgery could result in death. However, the surgery was done and most of the tumor was removed. But cancer returned and this time it was more aggressive than before.

We sadly hear stories like this every day which is why we’re determined to change it. Help us find a cure

He waited to meet his baby.

“We almost started to panic and they took as much of the tumor away as they could. When the tumor grew back it was more aggressive it couldn’t be operated on,” recalled the woman. While tragedy struck their life, Nicole was pregnant with their third child. So, when Nicola went into labor with her child, her partner was not by her side. The unwell man suffered a seizure and was rushed to the hospital in Milton Keynes. As soon as she gave birth at 5:07 AM, the woman took her newborn, Arya to meet her husband. 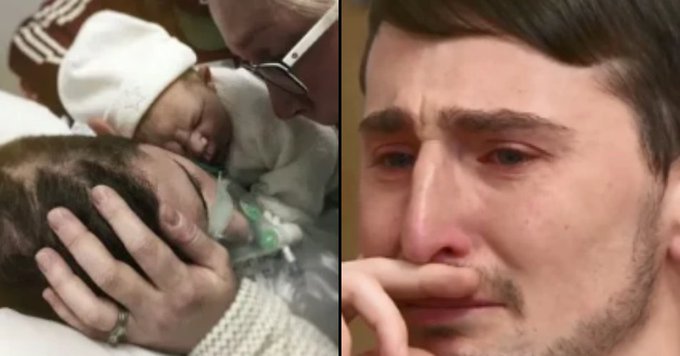 91 people are talking about this

Nicola wanted her husband to see their daughter but she was welcomed with the most painful news ever. She was informed that her partner would not be able to make it. So, the grief-struck mother took her newborn to Brett’s room. She placed her on his chest. “When we arrived there, I took her over to him and laid her on him and described what she looked like. So we had a couple of hours. I said to him, ‘It’s OK, don’t hurt yourself any more’,” recalled the mother of three.

After exchanging goodbyes to each other, Brett dozed away into an everlasting sleep at 8:25 AM. Hours after meeting his daughter Brett passed away. The image of Brett with his baby girl on his chest brought tears to everyone.

Viewers of the show could not contain their emotions that they took to Twitter. “How horrific we just watched someone’s life disintegrate like that, cancer is so fucking terrifying #Gogglebox,” twitted one person. “#Gogglebox is killing me. Fuck you cancer. Well done #Gogglebox such a needed cause. Hugs and heart going out to all the families and friends shown and effected,” wrote another.