Dressed in beautiful floor-length white gown, the bride is always the center of attention at the wedding. The color white is restricted to them on that special day. No bride would want their thunder to be stolen by anybody, least of all her own mother-in-law. When someone who is part of the family you’re going to step into decides to steal your thunder, the after effect of that can be nothing but a good thrilling drama.

When she was out picking the perfect gown for her big day, bridse-to-be Amy Pennza had no idea she had to even consider discussing the options with her soon to be mother-in-law Terri. And when she arrived at the venue dressed in a beautiful white gown, Amy was surprised to find her mother-in-law also dressed in a wedding gown.

According to Metro News, the author from Ohio shared her story on Twitter after the famous talk show host Jimmy Fallon asked his Twitter followers to share their wedding fails.

My mother-in-law wore a wedding dress to my wedding. So, yeah, top that one, Twitter. #weddingfail @jimmyfallon 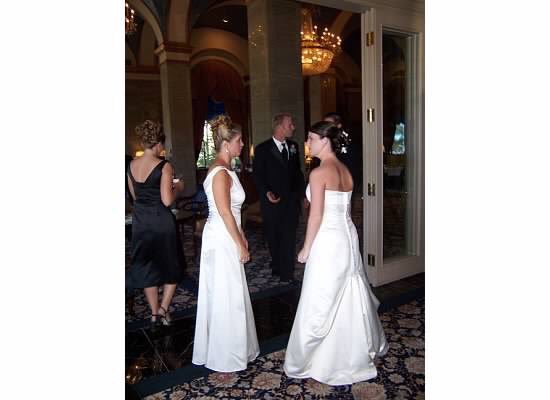 13.2K people are talking about this

Among all the tweets that were shared, Amy’s tweet stood out for obvious reasons. “My mother-in-law wore a wedding dress to my wedding,” Pennza wrote. “So, yeah, top that one, Twitter,” Amy tweeted with an image of herself and her mother-in-law unwillingly twinning on what was supposed to be her big day.

The tweet that amused many was flooded with people’s comments who wanted to know more of the story. While some could not control their giggles, others wondered if her mother-in-law was still alive after such a brave act. The author took to Twitter to answer the several questions raised by curious Twitter users. “I don’t remember much about the day. Most people say their wedding is a blur, and that’s true for me, too,” she explained. “But I know I said this: ‘You… You could be the bride…’” said Amy on Twitter.

She also went on to say how her sister and college roommate feared the worst and stuck to her to prevent an uncontrollable situation. “They both spent the reception looking at me, then each other, then MIL, then me, then the cop the venue made us hire — hoping I didn’t go for his taser,” said Amy.

However, she told Metro that she was less livid and more stunned by her mother-in-law, Terri Pennza’s choice. She also confirmed that Terri didn’t have any intentions to hurt her but was just a frugal individual. Amy explained that Terri was brought up in extreme poverty and was actually a wonderful person who was just looking for a bargain buy.

You a better person than me. I would have beat her ass in front of her son and still married him after. Lol

“I know it’s hard for people to wrap their minds around anyone breaking that etiquette rule for any reason, but she saw a steal and couldn’t turn it down,” said Amy to Metro. She told people how her mother-in-law’s thrifty behavior was often talked and laughed about. “For example, she takes the olives and celery out of a Bloody Mary and saves them for salads.”

“She once walked casually to the table where I was eating a subway sandwich and put my discarded cold cuts in a baggie because ‘someone will eat them,'” tweeted Amy.

However, She said that the wedding ceremony was successful and didn’t end in bloodshed. She also added that she shared a great relationship with Terri who called to apologize again after the tweet went viral.

What was she thinking?! Her hair is even in an updo! I-

I need the FULL story

36 people are talking about this