It seemed like just another normal day for Stuart and Emma Labuschagne as they put their baby boy, Michael to sleep in their UK home. They were completely unaware that their lives were about to change forever, in a matter of hours.

In the early morning hours of March 16, 2019, they noticed that their 14-week-old baby had stopped breathing. Baby Michael had just suffered a cardiac arrest. “Words cannot begin to describe the pain we felt in that moment,” the mother wrote on their GoFundMe page. “We watched our baby breathless, gasping for air while his heart stopped and paramedics worked to save his life. In that moment I did not think Michael would make it through.”

Michael was rushed to the hospital, where he was put into a medically induced coma so that any further damage to his brain could be prevented. Stuart and Emma were heartbroken, wondering if their little one would ever wake up again. Even if he did, they were told that he wouldn’t wake up the same, according to a video posted by Emma on Facebook. But the baby boy was about to show his parents that there’s a fighter inside his tiny little body.

After a 5-day coma, the baby started to stir awake as the sedatives wore off. And the moment he saw his daddy sitting at his bedside, he gave the biggest smile, making all their worries melt away.

“It’s a moment I will cherish with every inch of my heart,” Emma told CNN. “To be really honest, it’s got to be the happiest moment of my life. He is a living miracle, and we have never felt prouder of him.”

It was nothing short of a miracle and the mother wrote, “I am so so blessed to be here telling you that he survived!! ❤️ He survived an out-of-hospital cardiac arrest which only 7% patients do!”

However, it was just the beginning of a long journey for Michael. The parents were told that it was cardiac fibroma, a rare heart tumor that was attached to the left chamber of his heart, that triggered the cardiac arrest, as reported by Fox 4.

Emma, who also has two other boys, cannot believe what Michael is going through, considering how he still remains to be their bundle of joy. “Looking at him, he is like any other baby,” Emma said. “He is always smiling and grinning widely. His older brothers dote on him and he is a strong little character in our family. We are just so grateful for him, even with his medical troubles.” 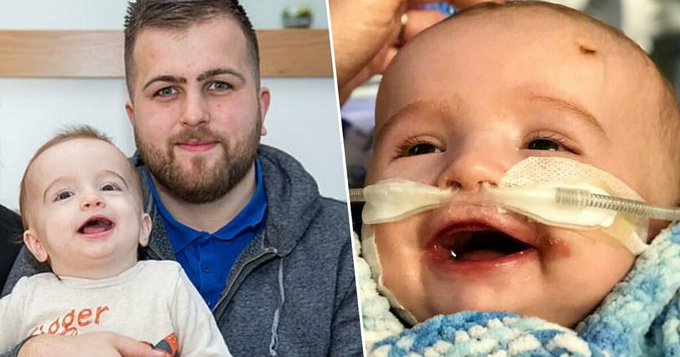 Because Michael’s condition is so rare, they are trying to raise enough funds through their GoFundMe page to get him the right surgery so that their son has a fighting chance at a normal life. “We are fundraising to pay for surgery which is not available in the UK and unfortunately is not routinely funded by the NHS,” Emma wrote. “Boston Children’s Hospital, ranked #1 paediatric hospital in the world, has quoted us $147,000 which converts to approximately £116,000 for the procedure… The dream is to get him to Boston as soon as we can.”

Emma calls Michael the family’s “miracle” and he currently has an internal pacemaker and defibrillator. Until he gets the treatment he needs, they are living in fear of his heartwarming smile fading away.

The mother wrote, “Every day we worry if it will be our last with Michael. Please help us to get his tumour removed.”

The family is currently trying to share great memories with Michael, hoping that they will be able to take him to America for the surgery he needs.