If it isn’t enough that women are still playing on a field that is tipped against their favor, they also have to deal with a pompous man coming along every now and then, judging them for the most immaterial things like how they look and what they wear.

This time, the pompous man is someone who comes from the field of education, but rather than inspiring students, he is not only insulting the girls in his class, but also making shocking and inappropriate comments about women in general. Dr. Peet Morris, an Oxford IT expert and a former statistics lecturer at St Hilda’s College, wrote extremely provocative comments when he spoke about how women dress up for black-tie events.

Talking about black-tie events, Morris complained, “Some people these days have no idea what it means.” Elaborating on how he thinks women should dress, the Oxford staff member tweeted, “women shouldn’t wear tight dresses if they have tummies”.

Feeling like they can never escape the male gaze, a number of people spoke up against his comments and called them, “sexist and inappropriate”, according to The Sun. Appalled by the judgmental remarks coming from a lecturer, one student also said, “You want to be taught, not ogled.”

If it wasn’t enough that he implied what a woman should and should not wear, Morris also said with reference to black-tie events, “It seems people these days have no idea what it means — men turning up in lounge suits, women turned up dressed like h**kers. Yes, I’m old.”

An Oxford insider also added, “It’s a shocking case of women being objectified and told how they should appear by men. It’s wrong. You’d think someone of this intelligence would have the sense to keep such offensive opinions to themselves.” The Oxford student paper reported that Morris had later taken down the post and also deleted his Facebook account.

People who did see the 45-year-old man’s tweet before he took it down responded to it. And one of them was academic Dr. Ben Britton, who called Morris’ justification of “I’m old” as an “excuse”, as his twitter biography revealed he was born in 1974. Dr J. Bernadette Moore, another academic, “Yup… ‘h**ker’ classic example of judgment women face!” as quoted by the Daily Star.

Following the outrage over his sexist comments, Dr. Morris believed he was the victim and said, “what about us […] men, and how we feel? As a man I certainly feel an ever increasing level of misandry and sexism against me.”

Our first edition of the new academic year is out today! Come visit us at freshers fair to pick up a copy! 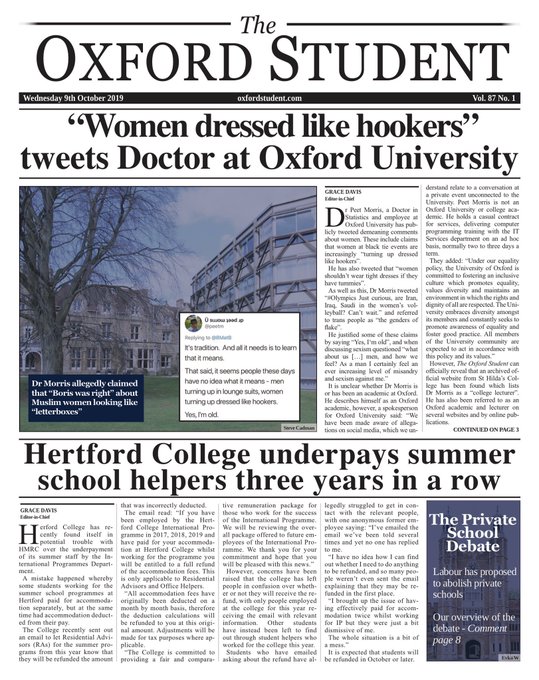 See The Oxford Student’s other Tweets

A spokesperson for Oxford University told MailOnline, “Peet Morris is not an Oxford University or college academic. He holds a casual contract for services, delivering computer programming training with the IT Services department on an ad hoc basis, normally two to three days a term.”

However, what matters is not the title or job description that Morris has at the prestigious university, but being able to respect all genders alike and accepting that every individual is has the freedom of expression.

Dissociating themselves from the controversy, the University spokesperson added, “Under our equality policy, the University of Oxford is committed to fostering an inclusive culture which promotes equality, values diversity and maintains an environment in which the rights and dignity of all are respected. The University embraces diversity amongst its members and constantly seeks to promote awareness of equality and foster good practice.”

While the spokesperson of Oxford has made it abundantly clear that the insititution is, in no way, associated with the demeaning comments made by Morris, the students have not shied away from expressing their outrage over his distasteful statements.