It was one family’s little girl that was taken away. But an entire city mourned her death, standing in support of the family after they lost their three-year-old girl in one of the most unimaginably painful ways.

On Sunday, October 27, 2019, more than 1,000 people came to the New Beginnings Christian Ministry in Birmingham, Alabama with only one person in mind, Kamille “Cupcake” McKinney, a three-year-old girl, who had an undeniable impact on the people she loved in a very short time.

“Kamille ‘Cupcake’ McKinney was abducted while attending a birthday party in Birmingham’s Tom Brown Village public housing community on Saturday, Oct. 12, 2019,” wrote the Remembering Cupcake website. “Her abduction spurred a massive search effort that lasted for nearly two weeks. The entire state of Alabama was devastated to learn from Birmingham Police on Tuesday, Oct. 22, 2019, that Kamille’s remains had been found in a dumpster. The heart-wrenching news has touched not just the Birmingham community but has resonated nationwide.”

For the innocent girl who was taken away too soon, it was not just any funeral that was held on October 27. It was a celebration of life. In the church, the little white coffin was placed in the midst of balloons and flowers, surrounding it with the bright colors of purple and pink. Colorful cupcakes also kept the white casket company, while 800 mourners sat in the church to bid Kamille farewell and over 400 took their place in an overflow room. 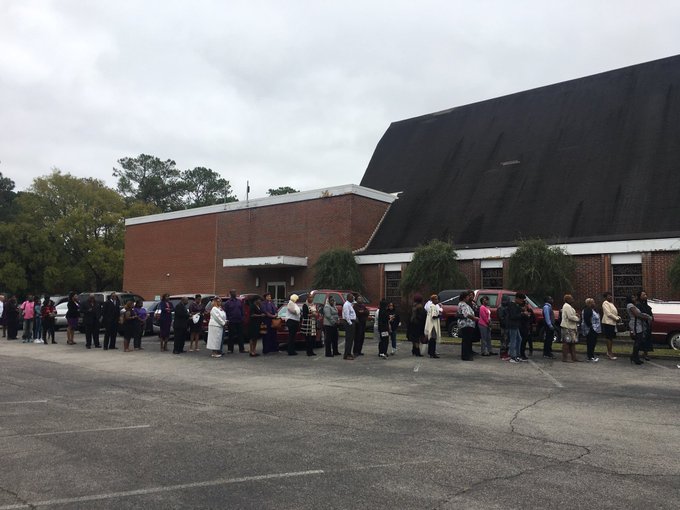 During the “homegoing service”, the young girl’s uncle spoke lovingly about his niece, as reported by CNN, and said, “Even though it may be sad here for us … not having her here and needing her here, God has gained an angel in his kingdom.”

The young girl’s death was caused by suffocation and every single person who attended the ceremony knew that she needed a well-deserved farewell. “She was an angel sent from Heaven,” said Pastor Sylvester Wilson. “God came back just to get his angel because one little girl that lived to be 3-years-old brought this whole city, this whole country together. Don’t let her death be in vain.”

For people who attended the ceremony, it didn’t matter to them where they knew the family or they had met Kamille. Even strangers came to say their final goodbyes to the little girl because they, too, could understand the unbearable pain that comes with such a loss.

Shayla Fenderson was one of many such people who came to show support. And she didn’t come empty-handed; she came all the way from Montgomery with a cupcake drawn on her face and princess balloons in hand. “She was so pretty,” Shayla said, as quoted by ABC 33/40 News. “It is something about her eyes that touched me. She had the biggest, prettiest, glossiest eyes. She was a beautiful little girl. I do not have my own, but I couldn’t imagine going through that, so it was real important for me to come up here and show them that Montgomery is with y’all.”

Marsetta Tucker, who had also never met Kamille, had made handkerchiefs with cupcakes on them in her honor and offered them to the family. “She felt just like my child, and I just don’t understand how this could have happened to her,” Marsetta said. “I have been praying about it, asking God to give me some clarity, some understanding most of all because this is something I’ll probably have to wait to understand. Some things we don’t understand here on Earth. We have to wait. So, this may be one of the times that we just have to wait.”

What happened to Kamille brought hundreds of strangers together. And the white casket finally made its way from the church across the city, where a horse-drawn carriage covered the last 1.1 miles to Elmwood Cemetery where Kamille was to be laid to rest.