“I’d like to have a family. I’m getting older and maybe that experience can help you to be the best that you can be to yourself and to another person that you’re with.”

It’s been over a decade since Keanu Reeves said this in an interview with Parade. Over the course of three and a half decades, the star has touched the peak of fame and received an outpour of love for all that he says and does, for simply being himself. But the one thing his ardent fans and well-wishers have always hoped for was to see him with someone who makes him happy, filling his life with love.

Finally, for the first time in decades, the 55-year-old actor stepped out onto the red carpet at the LACMA Art + Film event in LA, and he was not alone.

In his years of stardom, spanning more than 30 years, he has never publicly displayed his affection for a woman. The Daily Mail reported that the Hollywood heartthrob has not had a long terms serious relationship either. But when the 55-year-old actor held the hand of 46-year-old artist, Alexandra Grant, and stood in front of the camera, his eyes couldn’t hide the adoration he had for her.

The couple was extremely comfortable beside each other, “confirming their status as a two-some”, reported The Sun. However, Yahoo Entertainment contacted Reeves’ team for comment and reported that it wasn’t the first time the pair publicly held hands.

Reeves and Grant have known each other for quite a while. They met at a dinner party in 2009 and could see how much their interests matched. The pair started collaborating and working together; having produced two books—Ode to Happiness, released in 2011, and Shadows, released in 2016. The books were described as “grown up children’s book”, featuring words written by Reeves and drawings created by Grant, according to BBC.

For both of them, Ode to Happiness added a ‘first’ to their repertoire. It was Reeves’ first step into the world of writing and Grant’s first artist book, according to People.

What makes the book even more special for the two of them was that it was initially just a private gift. They had never intended to publish it. It was a friend, Janey Bergam who secretly passed on Reeves’ writing to Grant. She decided to do something special and created the images, turned it into a book, and gifted it to Reeves.

“It was a surprise,” said Grant, according to The Guardian, “and a private gift. We didn’t make the book to publish it; it was meant to put a big smile on our faces and make everyone laugh. Then someone said, ‘I want five copies’, and that’s when the lightbulb went on.”

About a year after they came out with Shadows, Reeves and Grant co-founded the company X Artists’ Books, which publishes “courageous, Beautiful Books for Curious Readers”.

While fans everywhere eagerly wait for an official confirmation on their relationship, people are glad to see that they are still close and have high regard for each other.

A number of people reacted to seeing them holding hands and couldn’t be happier to see that Reeves does have someone special in his life.

My gosh, they are radiating. Just oozing happiness and purity all over. I wish them the best

I don’t know why I’m so happy Keanu Reeves has a girlfriend (who is age appropriate no less). I don’t know this man personally. But what happened to him sucks and he deserves some happiness.

If true, I’m soooooooooooooooooooooooo happy for Keanu Reeves that it breaks my heart a little bit.https://people.com/movies/keanu-reeves-holds-hands-artist-alexandra-grant/ …

Wanted to make sure you saw this photo of Keanu Reeves staring meaningfully in the distance, with his cutie pie girlfriend on his arm, leaning her head on his shoulder, in the enchanted pink light of a sushi bar. #Romance 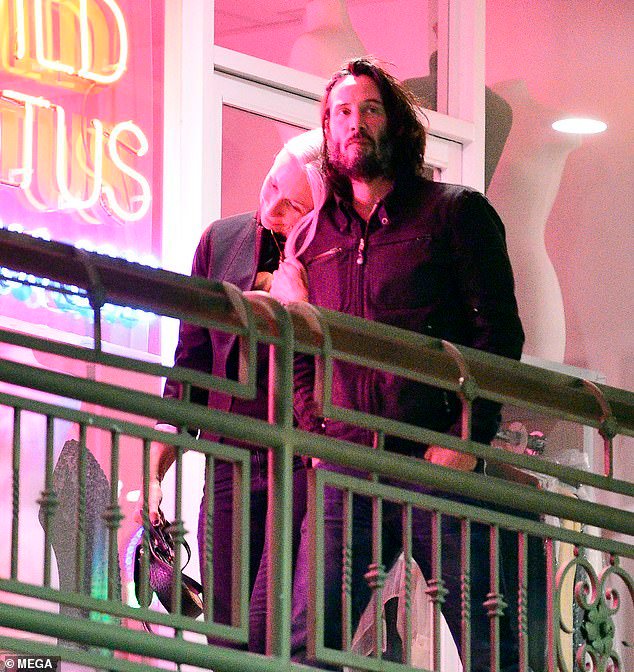 The couple looked wonderful together at their recent red carpet appearance, and it certainly wasn’t just because he looked dapper in his black suit while she looked elegant in her navy blue dress. It was mostly to do with them, beaming beside each other, thoroughly enjoying each other’s company.