Children are heavenly treasures to most parents. Watching them grew and being part of every step in their life is their dream. Therefore, losing them at a very young age is unimaginable. Mike and Nicola, however, were victims of such a fate. In spite of knowing what awaited them, they did their best to make every second count in the life of their child.

We were very sad to learn that Oliver had lost his battle with cancer. He received numerous blood and platelet donations. Donors enable families to spend more time together. Thank you to Oliver’s family for their work to promote blood donation.

15 people are talking about this

According to Mirror, the family from Plymouth, Britain lost their 11-year-old boy, Oliver Brown to a rare form of blood cancer on 26 October, 2019. The young boy was the only person in the country to have been diagnosed with Myelodysplastic Syndrome. He bid farewell to his loved ones at the Little Harbour Children’s Hospice. Oliver’s family stood by him and did everything possible to make his last days warm and happy. And the one thing he liked the most was Christmas, but knowing that his days were numbered, Oliver’s parents didn’t know if he would make it till December. So they decided to bring Christmas early for their boy.

A week before his death, the family put up Christmas decorations. Though they usually did this on 1 December every year, they let go of the traditon this time. The heartbroken parents did not want Oliver to miss out on one last chance to celebrate his favorite season with his brother Benjamin. “We decided to bring it forward for him and Benjamin, to enjoy together. In our minds, he made it to Christmas 2019. He loves Christmas, so it’s the right thing for us all,” said Mike to Wales Online. 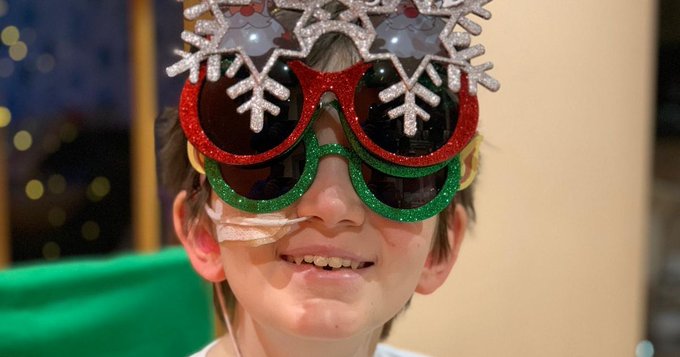 They decorated their house with radiant lights. They even had a life-size singing Santa, a Lego Winter Village and an illuminated snowman in their garden. The family played Christmas tunes, movies and got festive jumpers to celebrate the season. “He genuinely adored Christmas and we knew that he wouldn’t be here this year to experience it. And really, what the hell does it matter how early it all goes up,” added the 39-year-old father. Here’s a photograph of Oliver happy and cheeky during Christmas 2017.

While the family mourns his loss, they are very proud of their boy. “He was adored by anyone who ever met him, he was unique. They broke the mould when they gave us Oliver. He was loving, cheeky, compassionate, brave, and was really contented with who he was as an individual. He had a real zest for life. He has undergone so much, far more than any adult would expect to go through in their entire life,” said Nicola paying tribute to Oliver. Though doctors had given him just weeks to live in May 2019, the young boy defied the odds and fought to live another 5 months.

Though he was sent home in May 2017, The family noticed his health going downhill after Easter 2018. Despite the treatments, Oliver’s cancer advanced leading to more devastating news for the family. Remembering his years of turmoil, Oliver’s mother said, “He was born deaf and his whole life has revolved around hospitals… Whatever Oliver has faced in life he has done with a smile on his face and love in his heart. There have been more laughter than tears in the past three years and we want to remember Oliver like that.”